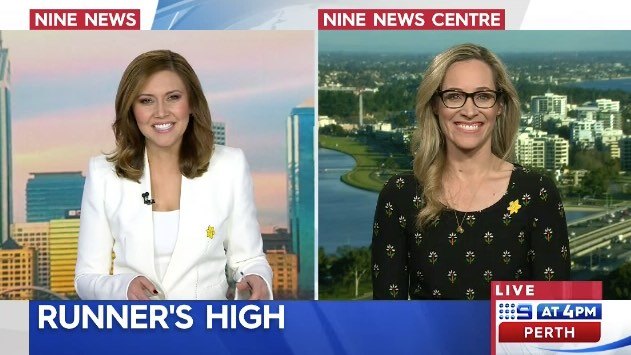 Aerobic exercise for the brain is mind altering, literally. With new cells created through a process called neurogenesis. Now this means that going for a run can actually create brand new brain cells. This means that the term “runner’s high” now means a lot more than just feeling good.

Dr Hunter states that “We know that exercise is really good for the brain in lots of different ways. We know that learning new skills, like picking up the tennis racquet or pulling out the golf club can promote those neural connections and pathways. But that runner’s high is that euphoria that we often feel when we undertake (particularly aerobic type activity) when we feel like all the problems of the day dissolve away or we walk out of the gym feeling much better than when we actually walked in.”

She continues on to say “That euphoria is thought to be from some chemicals called endorphins. Which are those happy hormones. In fact, they’re your own endogenous morphine and by having a rise in that endorphin, is supposed to promote activity in the area of the brain that is responsible for emotional processing. But new research is showing us that in fact exercise is thought to increase that neurogenesis, which is the development of new brain cells in various parts of the brain.”

These newly developed brain cells can help in many ways. With Dr Hunter stating that “the area that is of most interest is the hippocampus which is responsible for emotional processing, but also vocal memory and learning processes. Research has shown us that area of the brain is increased in volume in exercises over people who don’t actually exercise.”

Unfortunately, not all forms of exercise achieve this result. With Dr Hunter discussing that activities “like HIIT training, which is that high interval intensive exercise and also stretching exercises, don’t achieve the same result. So, it is definitely that aerobic type activity and as far as how much – probably 2, hour long sessions of huff-and-puff exercises per week is probably what’s required and do able by most of us.”

A recent paper published by Scientists at the University of Ottawa has found another chemical release when we run – VGF. Tamara had this to say about the study. “Well, we know very little about VGF, it is a rather new discovery. But this particular study looked at mice. They looked at mice that had certain dysfunction, they were not able to move particularly well, they had quite a shortened life span and those two afflictions were associated with some degeneration in the cerebellum which is the part of the brain responsible for the activity. Now when they gave these mice VGF or they put them on a treadmill, both of those things changed. They actually lived longer and moved better and it was associated with regeneration in the area of the cerebellum.”

However, the VGF pill is not readily available and human research is far off, so for the moment we still need to get up and out, to go for a run.